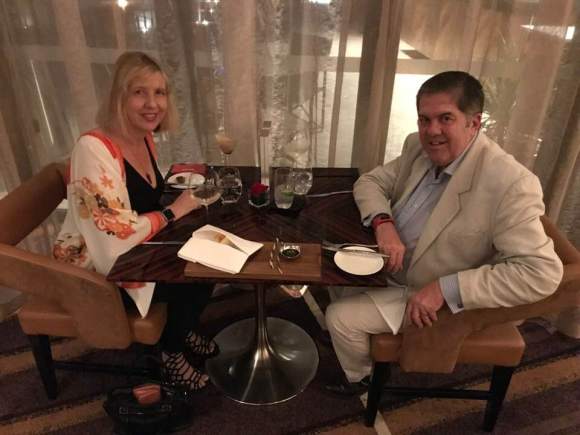 Ron and his wife Tania dining out in style in Brisbane just days ago. (Photo from Tania Watson’s Facebook page, with my apologies for lifting it without first getting permission.)

RON Watson was a lovely man. We were never close friends. Life’s exigencies had taken us on divergent paths less travelled, though in recent years we had compared our fitness walk performances via social media. But when I had most to do with him, which was during the 1989-1996 Goss Government in Queensland, we profited from a shared insistence on getting things right.

Ron’s background was media – he was the Australian Associated Press political correspondent in Queensland for 10 years before joining the dark side. He wasn’t an apparatchik, though one felt that even if he had been, he’d have insisted on propriety. He had the mark of the true professional.

He was media adviser to Treasurer Keith De Lacy from 1990-1996, a job that required presentation of financial fact rather than the smoke and mirrors favoured in more political ministries. He did that well. He certainly made the job of an editorial writer with some divergent ideas much more pleasant than it might otherwise have been. The political-economic nuances of editorial writing are not all that different from those of partisan collectivism within a government that’s anxious to advance specific interests and its preferred narrative. We got along famously, especially since we could share, from time to time, in camera, the sort of journalistic frivolity that gets you through your day. Ron knew I was straight down the line and I knew he was. He made it easy.

Well, mostly. There’s an anecdote that deserves retelling. At this distance I cannot readily recall which state budget it was, or what the specifics of the media inquiry were, but that doesn’t matter. It was at a budget lock-up, one of those annual and arcane previews of the budget attended by the media and carefully monitored by Treasury boffins and ministerial minders, which used to be such a feature of the annual exercise and perhaps still is. I jumped ship more than two decades ago and don’t know, and don’t want to.

Because I was writing the next day’s leader in The Courier-Mail, which on the morning after budget day would inevitably be on the budget, I was in the lock-up. I kept to myself – editorialists are best when they are solitary creatures – confident that Ron and the boffins, and afterwards the Treasurer, would respond in a timely way to a furrow of the forehead or a raised eyebrow. Budgets of course are political documents and they hide things. You need to know what they’re hiding, even if you’re not going to let that particular emaciated cat out of the bag in print. Ron knew my thinking. He was good like that.

That time, however, the list of things the media might ask even if you’re totally surprised that they’ve even thought about it, proved deficient in one minuscule detail. By the time it was raised as a question, after the lock-up and in the area where you waited for the elevator, Treasurer De Lacy, his boffins and his media man had left the building. Only the Premier, Wayne Goss, remained amidst the media scrum. The question was put (I think by Mike D’Arcy then of Channel Nine).

The Premier looked alarmed. Goss was a lawyer (a good one). He was not an economist. He looked at the ceiling. Sadly, he found no inspiration there. He looked around the crowd, somewhat in the manner of a kangaroo caught in a spotlight. His eyes fixed on me. “Richard, can you explain it?” he said, following this up without pausing for breath with a general statement to the gathered chooks: “Richard can explain it.”

Fortunately I could, at least to the satisfaction of the questioner and his colleagues. Ron and I had a good laugh about that later, in suitably discreet and private surroundings.

There’s another anecdote worth telling, this one from a Treasurer’s private dinner at Budget time. I arrived at the chosen restaurant on crutches, with one leg swaddled so tightly that even a Bethlehem manger baby might have complained, and hobbled up the steps to the door. Ron came to help me get in – he knew I was struggling but that there was no way I was going to miss one of Keith De Lacy’s chatty budget soirees – and whispered to me, “they’ll want to know how that happened.” He said this like a smiling assassin, though I knew he meant well.

I told the table, in response to the collective of raised eyebrows, that I had injured myself at home. That was perfectly true.

I just didn’t say that I’d done so in haste and panic a couple of days earlier when – as one did on balmier Brisbane mornings, in the privacy of one’s house – I was naked in the kitchen making myself another coffee before getting ready to buzz off to work when our cleaner, who usually arrived long after I’d left, opted that day to turn the key two hours early. I made it to the bedroom and managed to slam the door shut before I was seen. But I left a good bit of skin and tissue on the doorjamb and split my foot between the little toe and the rest in the process.

I never told Ron the real story. I should have. He’d have had a good laugh. So Ron, this one’s for you.