This is about a book that I want to read. History without the histrionics.

The profound and myth-shaking true history of friendship and brotherhood between British invaders and the Aboriginal people whose lives and land they changed forever.

This is how you fall in love with history.

Murray Arnold’s beautifully told, scrumptiously researched study of Aboriginal-European relations in West Australia’s early outpost of Albany is the book that had to happen.

A Journey Travelled treads where angels have feared to even tiptoe in the fraught and tender story of the first century of invasion. It provides a rare harvest of historical fact, and eye-witness accounts to give a history that defies the Australian norm. 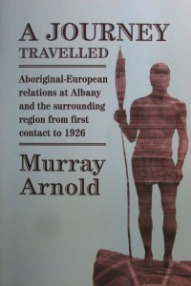 For those who seek healthy relations and mutual respect, this factual account reminds us that it is individuals of all races who shape history.

And for the people of Denmark, Albany and surrounds this book restores the region’s legacy as a once and potentially future site for an extraordinary Australian story.

Veni. Vidi. Do try to Vici. View all posts by 33 Degrees of Latitude