A Load of Buluh

Buluh Abu Kacang is Made Wijaya, who used to be Michael White, an adolescent student of Sydney, before he dropped out ahead of finding time to actually drop in, and parlayed this feat into a successful Bali-based career as a landscape gardener. Over the many years since he has acquired considerable and valuable knowledge of the island, the people and the Hindu religious and social culture of Bali. He writes the long-standing and well-known Stranger in Paradise column, which most recently has been appearing in the magazine NOW! Bali. It also appears on his social media pages.

As a rule I wouldn’t bother publicizing the profane and scatological invective with which he peppers those with whom he is displeased.

But his most recent email traffic is so hilarious that it would be a shame not to share it. 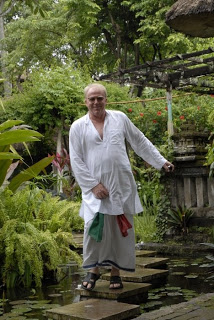 That’s him, above, not quite walking on the water.

You really are an incorrigible git.

You pontificate yet again.

You over dramatise, sensationalise and ingratiate yourself with your pompous drivel.

You guild the turd with the use of words like “slain”, “executioners”, “uniformed killers” and “Public executions”.

You speak with naive expertise in criticising the police in the way they handled the incident. It’s a pity that you weren’t there to offer your expert negotiating skills with your silver tongue.

That would have rendered a blank space in the Bali Advertiser for some worthy journalism and not the crap that you produce.

Your “straitjacket” solution is a laughable lame duck and “the men in white coats” would have been covered in their own blood. Your bleeding heart is pathetic. Get rid of your rose coloured glasses Dick.

You offered no condolence to the family of the dead police officer Anak Agung Putu Sudiarta, yet you seem to express some sympathy for the maniac Sabet.

You insinuate that the death of the police officer was attributed to (in your opinion) the mishandling of the incident by police.

You mention that the fatal shooting of Amokarne Sabet was unnecessary. How you came to that conclusion baffles me.

There are several videos of the incident on the internet, one in particular is more graphic and represents a clearer picture of events leading up to the death of Sabet.

It clearly shows Sabet ignoring police instructions to surrender and drop the knife he was wielding. A plainclothes officer fired a warning shot in the air, Sabet then taunted the police ranting “I am god” “come shoot me” he then made a charge at the officers who open fired with a volley rubber bullets in order to subdue the maniac, he stopped momentarily then wildly charged again stabbing to death the police officer resulting in Sabet being fatally shot.

What the hell do you mean by “Any element of selfdefence fled the field”, are you insinuating that Sabet had a right to defend himself? If so you are more of an idiot than what I gave you credit for.

You know damn well if this incident had happened in other countries with people behaving in the same manner as Sabet they would have been shot dead on the spot. Stop having yourself on Dick.

Your criticism of the police is based on your own prejudice. You are the one who has the explaining to do when the police pay you a visit to sort you out. Hati hati Dicki.

Good to read you are still smarting from the last time I gave you a well deserved kick up the arse.

Dear Buluh (or is it Kacang?)

So nice to hear from you. I do enjoy your little missives. Nothing quite beats a spew of invective for risibility.

Brevity can make a point.

<Here Buluh (or is it Kacang?) appended a recent B&W profile photo from my Facebook>

I didn’t realise that you were such a decrepit old fart.

Obviously the early onset of dementia has taken effect which accounts for the drivel and crap you write.

The next time you give me cause to kick you up the arse I’ll be a bit more gentle with you, I do have sympathy for the infirmed.

Pip pip and all that old chap, keep your pecker up if you can manage it.

Till we cross swords again.

Leaps and bounds ahead of you old Dicki

That depends on the direction in which you’re leaping and bounding, old chum, and the skill with which you perform these feats.

Give it away, there’s a good little fellow. You must have other things to waste your time on.

I tell you what little old Dick, let’s do a deal.

You stop writing crap in your column and I’ll “Give it away”, you will never hear from me again.

You continue to write the excrement that you call journalism I’ll rub your nose in it.

I don’t consider my valuable time wasted when it comes down to giving you a well deserved kick up your withered old arse.

You have valuable time? Good. Use it to effect old chum. Do something useful with it. Write your own column, for example – that’s usually readable. It’s not journalism, but it’s fine. And save your unqualified lecturing for those who sit at your feet.

I assume you have to pay Bali Advertiser to print your pathetic column.

Yes your right you are not a journalist nor have you been a political advisor of any repute (if any), the only advice you may have given a politician would have been at the urinal.

No-one sits at my feet old Dick, I just kick contemptible people like you up the arse who deserve it.

Can’t handle the criticism can you Dicki.

I think you meant to write: “Yes, you’re right, you are not a journalist; neither have you been a political adviser of any repute (if any). The only advice you may have given a politician would have been at the urinal.”

You’d still be wrong, but at least you’d have been grammatical. Try that for a novelty.

As to criticism: Water off a duck’s back, old chum. Comes with the territory.

(I’m enjoying our conversation. It’s the longest one we’ve ever had.)

You are a loser Dick and you know it.

You are a legend in your own lunch and you know it.

Enjoy you life in the pasture Dick, what’s left of it old Dick.

I’m not a legend at all, and I don’t eat lunch. I sometimes have amusing conversations with idiots.

How original Dicki, pity you can’t eat your own words.

Oh, you’re back. I was getting worried about you.

2 responses to “A Load of Buluh”